Los Angeles, officially the City of Los Angeles, often known by its initials L.A., is the most populous city in the U.S. state of California and the second most populous in the United States, after New York City, with a population of 3, 792, 621 (2010 US census).

Thursday: It’s too hot for a winter’s day. I’ve arrived after a ten-hour flight, and the world around me feels distorted. Out of focus. I haven’t had enough sleep and I’m fairly certain that it’s not the right time of day (night?). It’s disorienting. I’m disoriented. It’s loud as well. And everything around me – from cars to coffee cups – feels too big. Clumsy. I’m supposed to be meeting someone, but I can’t see him. He’s not here. There are too many people moving around me, and rooted firmly to the spot, I start to sway. Kelsey Grammer walks past, with a tiny baby strapped to his chest. This is definitely getting surreal.

Los Angeles is a city that’s notoriously difficult to define. And probably impossible to understand. Which also means that it defies description. Of course, adjectives can help, but as everyone’s experience of this vibrant, exciting, glamorous, immense, isolating, empty, narcissistic “city” is different, they’re not actually very helpful. It’s certainly bizarre: a place where – thanks to the film and television industries – numerous imagined identities are imprecisely separated from these multiple realities; where the everyday often refuses to be normalized. Los Angeles is characterised most easily (perhaps), by contrast; by contradiction. A friend once told me that everything you hear about Los Angeles – from the entirely fantastic to the utterly and incomprehensibly dreadful – is probably true. It strikes me that this is a terrible burden for a city to bear.

Malibu is an affluent beach city in Los Angeles County, California, United States. It consists of a 21-mile strip of prime Pacific coastline, and is famous for being home to Hollywood movies stars. 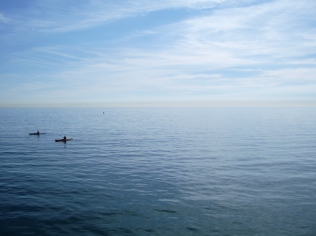 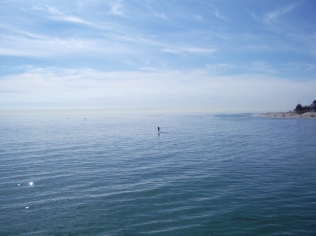 Friday: It’s slightly warmer than it was yesterday, which seems to be the perfect temperature for a winter’s day. It feels as though the world around me has stopped. It’s quiet and calm. Peaceful. And given my proximity to the busy Pacific Coast Highway, this is rather surprising. It’s sunny, clear and bright. Focused. The ocean looks remarkable – it’s perfectly still – and although I know absolutely nothing about surfing, I’m certain there’s no possibility of “catching a wave” (is that right?) this morning. It doesn’t look real. The entire scene is totally unconvincing, and I’m reminded of the 1998 film The Truman Show, which ends as the protagonist – the appropriately named – Truman Burbank (played by Jim Carey), realizes that he’s spent his entire life in a television show, living on a film set that exists inside a dome built within the Los Angeles area. But in this edition – my edition – the sun is brighter, the sea is flatter, and the clouds look suspiciously as though they’ve been airbrushed on as an afterthought. 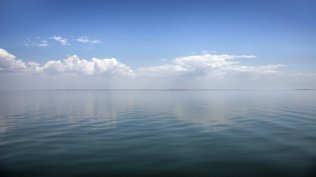 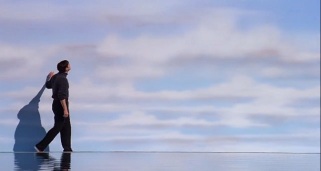 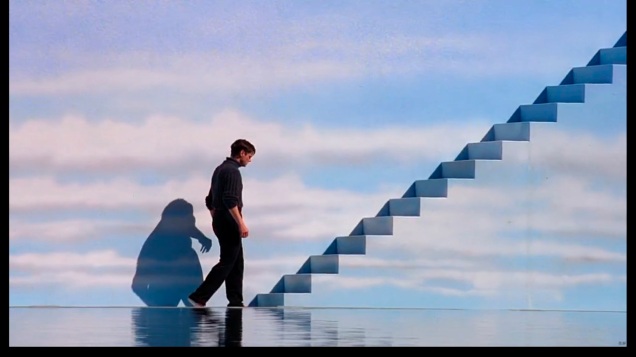 At the end of the Malibu Pier is the café to which I’m headed for breakfast. It’s a relative newcomer, but with an ethos summarized as “Fresh. Organic. Local”, and with a ‘casual’ décor that has been beautifully, meticulously, and deliberately designed, I can imagine that it’s going to be around for some time to come. It’s open from Wednesday – Sunday (9am-3pm), serving either breakfast or lunch. There is an excellent range of freshly squeezed juices, as well as teas and coffee. And it’s an interesting menu, too. Basic enough that it’s going to have a wide appeal, but unusual enough to keep people coming back. It’s not cheap, but to be fair the prices are similar to what you’d expect elsewhere in Los Angeles. 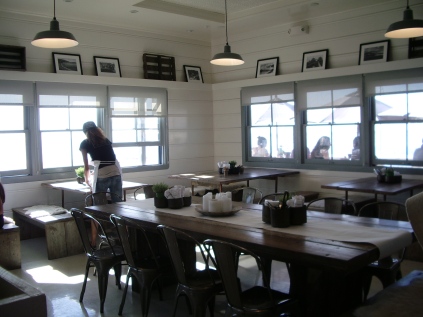 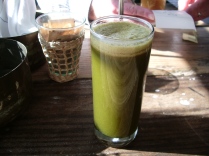 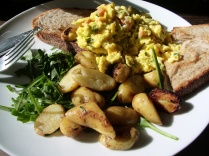 I had the farm scrambled eggs, smoked salmon and ricotta ($16.00), which was really very good, along with a filter coffee ($3.00). Following a recommendation, I also had the apple and kale juice ($6.00), although I was first tempted by the idea of the carrot, beet and orange. It was absolutely wonderful, and quite the thing to convince me that I should probably drink kale juice every day for the rest of my life. But that’s Los Angeles for you.

The rest of the menu was appealing too, with items including multigrain pancakes with bacon bits and maple syrup, quinoa oatmeal with coconut milk, sandwiches (from fried egg, bacon and arugula to chicken, ricotta and bacon), and salads (including kale caesar and burrata served with seasonal fruit).

The Pier at Malibu

Of course, the fact that everything has been so very carefully designed also makes it appear (at the very least) ever-so-slightly contrived, but focusing on the stunning view makes that easy enough to forgive. If they were open for dinner it would be perhaps the most popular place in Los Angeles county to watch the sun set. But even if you can’t (yet) watch the sun go down, it’s definitely an(other) excellent place for celebrity sightings. And with that in mind, I can’t help wondering what Truman Burbank would make of it all…

Originally from the South of England, I've also had homes in Australia (Canberra) and the US (Los Angeles). I've been based in the UK city of Sheffield for a couple of years now. My blog is about adventures with food - markets, ingredients, books, recipes, places I've eaten and other related experiences. It focuses on stories from Sheffield, South Yorkshire and nearby Derbyshire, as well as places farther afield.
View all posts by Georgina →
This entry was posted in Brunch, California, Drinks, Food, Los Angeles, Lunch, Review, Travel and tagged Jim Carey, Malibu, Malibu Pier, The Malibu Farm Cafe, The Truman Show. Bookmark the permalink.