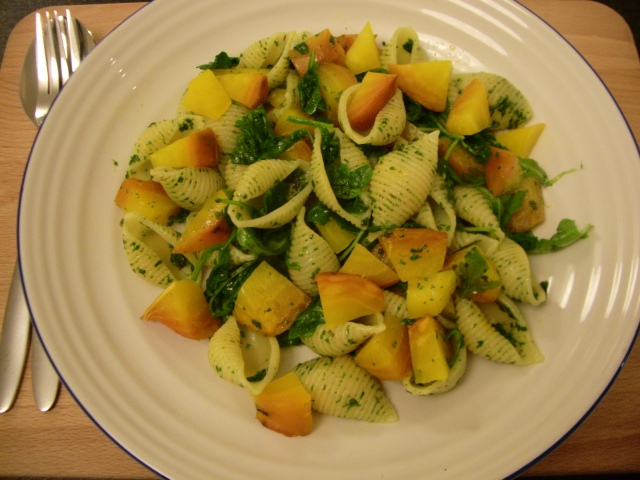 Golden beetroot is a beautiful vegetable. It is characterised not only by its wonderful, sweet and earthy flavour (which is slightly milder than its red counterpart), but also by its stunning, unbelievably vibrant, bright yellow colour. Beetroot is in season from the late summer months, but this golden variety has such a fabulously autumnal appearance that – as far as I’m concerned – it easily rivals the pumpkin as the most seasonally evocative vegetable. (And, of course, you don’t have to attempt to carve a golden beetroot into intricate Halloween shapes in order to achieve this effect).

Although it is a traditional – heritage – variety, golden beetroot declined in popularity from the end of the nineteenth-century, giving way to what is now the more common red / purple variety. It has recently been experiencing something of a revival though, and is more often found in stores and markets than it was just a few years ago. If you haven’t already tried it, it’s definitely worth a go… 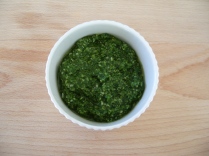 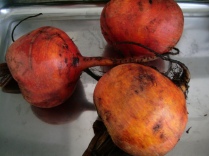 The pesto for this dish is made with a mixture of fresh herbs, and is the perfect thing to do with any that are hanging around in the fridge, perhaps in danger of going to waste. I used basil, mint, chives and parsley, although almost any of the soft herbs will work well. It is – apparently – always best to include a large handful of parsley though, which helps to balance the overall flavour. But of course this recipe is also great made with a store-bought pesto, so feel free to substitute that instead. 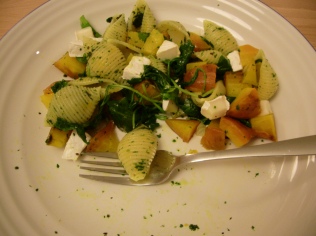 For the herb pesto:

A handful each of 3 or four different soft leaf herbs

If (like me), you don’t use all the pesto for this recipe, then it keeps well in the fridge for a few days, or can even be frozen for future use

Place the all the herbs and garlic into a food processor and pulse several times.

With the motor running continuously, slowly add the olive oil until a thick paste is formed.

Add the Pecorino and pulse two or three times.

For the golden beetroot pasta:

A couple of handfuls of rocket

Carefully wash the beetroot under cold running water – making sure not to break the skin – and pat dry with kitchen paper. Cut away the leaves, keeping at least 1″ of stalk.

Place in a large roasting tin, and add some olive oil – rolling the beetroots in it in order to make sure they are well covered. Sprinkle with a little salt.

Bake in the preheated oven for 40 – 45 minutes or until the beetroot is soft but not shrivelled. Leave to cool slightly, then cut away the root and stalks, and rub the skin away. Chop the beetroot into small dice, and keep warm.

Meanwhile, cook the pasta so that it’s ready just as you finish cooking, peeling and chopping the beetroot. Drain and return to the pan. Add 1-2 tbsp pesto (according to taste) and stir thoroughly.

Add the rocket, stir again – allowing the rocket to wilt – then add the cooked beetroot.

Finish with some cubed or diced goats’ cheese (optional), and serve with a fresh green salad.

Originally from the South of England, I've also had homes in Australia (Canberra) and the US (Los Angeles). I've been based in the UK city of Sheffield for a couple of years now. My blog is about adventures with food - markets, ingredients, books, recipes, places I've eaten and other related experiences. It focuses on stories from Sheffield, South Yorkshire and nearby Derbyshire, as well as places farther afield.
View all posts by Georgina →
This entry was posted in Food, Lunch, Recipes, Vegetables and tagged Beetroot, Goat's Cheese, main meal, Supper, vegetarian. Bookmark the permalink.