Late August, given heavy rain and sun
For a full week, the blackberries would ripen.
At first, just one, a glossy purple clot
Among others, red, green, hard as a knot.
You ate that first one and its flesh was sweet
Like thickened wine: summer’s blood was in it
Leaving stains upon the tongue and lust for
Picking…

Taken from: Blackberry-Picking by Seamus Heaney

Along with other countries in the Western world, collecting food in the wild is something no longer routinely practised by the majority of people in the UK. Over a relatively short period of time – perhaps just a few generations – everyday practices of foraging have declined, along with the knowledge that accompanies them.

But blackberries, which are easy to find and simple to identify, are clearly an exception to this rule, and blackberry picking remains a popular activity for many. Blackberry brambles really do grow prolifically, and are common in almost any landscape – just as likely to be found in urban as well as rural landscapes, on wasteland and derelict sites as well as in hedgerows and along footpaths. The brambles in the photographs below were taken near Sheffield’s Victorian Cemetery, now an historical monument and heritage site. 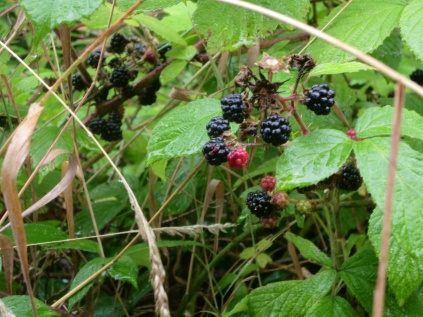 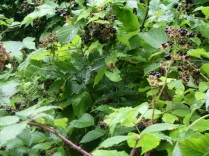 Throughout late summer and early autumn it’s not unusual to see people equipped with bags, plastic boxes and other containers as they stretch and strain across brambles – scratching hands and arms in the process – in their endeavour to collect as many ripe fruit as possible. Purple-stained fingers, nails, lips and tongues are equally likely. And it’s almost guaranteed that the process will also involve getting attacked by hidden stinging nettles.

As with other foods that are collected in the wild, the flavour and texture of blackberries are often different from those that you would buy. It has been a dry summer in the UK this year, and apparently that’s reflected in the relatively small size of the individual fruit. They are also less juicy than commercial versions, but the taste is definitely more intense, and that can certainly be considered as a bonus. It’s also interesting that the blackberries that you pick will differ from bush to bush, as well as across the picking season (those that ripen earliest tend to be both juicier and sweeter).

When it comes to using blackberries, there are several popular options. The firm favourites – each of them a classic – are pies, crumbles, jams and jellies, although there are many other possibilities as well. And then there is blackberry wine, which I have never made but really think that I should have a go. These are all good things. 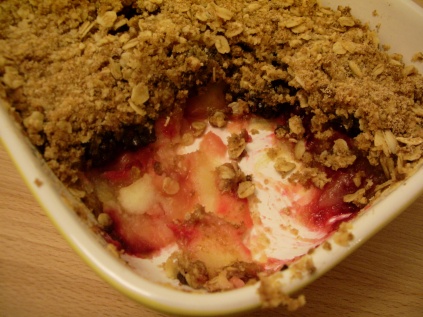 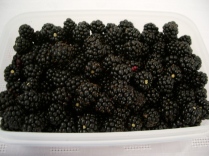 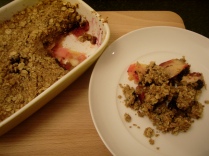 We’re definitely nearing the end of the blackberry picking season here in the UK. But there might still be time. So, if you don’t already have plans for later today, then why not grab a container, and head for your nearest footpath or park. Just make sure that the berries you’re picking have turned that wonderful deep purple-black colour, and you’ll find them just as Seamus Heaney so beautifully describes,“like thickened wine”, full of “summer’s blood”…

2-3 medium bramley (or other cooking) apples, peeled, cored and sliced

Layer the apples and blackberries in a shallow, ovenproof pie dish. If you think that the fruit needs sweetening, sprinkle over the sugar to taste.

Place the flour in a large bowl and then rub in the butter until it resembles breadcrumbs. You can do this in a food processor, but either way make sure to leave a few lumps of butter so that the topping is not too fine.

Stir in the oats and the brown sugar and sprinkle over the fruit in the pie dish.

Bake for 35-45 minutes or until the fruit is cooked and bubbling juices seep through the topping, which should be crisp and golden brown.

Cool for a few minutes before serving with custard or cream.

Originally from the South of England, I've also had homes in Australia (Canberra) and the US (Los Angeles). I've been based in the UK city of Sheffield for a couple of years now. My blog is about adventures with food - markets, ingredients, books, recipes, places I've eaten and other related experiences. It focuses on stories from Sheffield, South Yorkshire and nearby Derbyshire, as well as places farther afield.
View all posts by Georgina →
This entry was posted in Food, Fruit, Recipes, Seasonal, Sweet things and tagged blackberries, blackberry and apple crumble, blackberry picking, bramble, dessert, seamus heaney. Bookmark the permalink.