Marrow Stuffed with Chorizo and Couscous 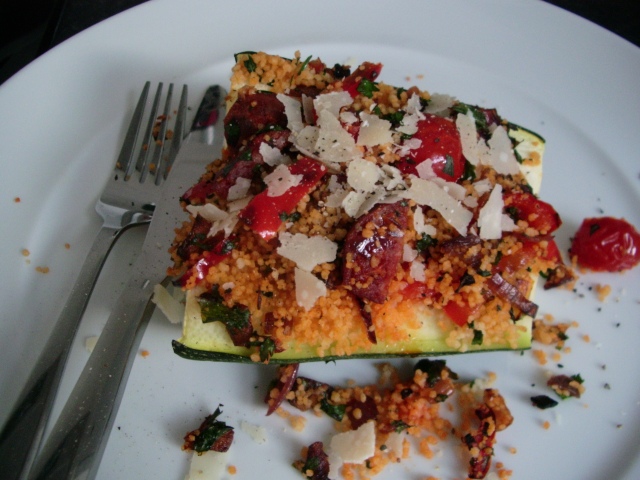 This is the second part of my short series of seasonal posts about marrow. (The first can be found here). I’ve mentioned previously that marrow isn’t my favourite vegetable, and as well as having to overcome the difficulties associated with its large size – it certainly wasn’t going to fit in the fridge or the oven in one piece – it’s probably also worth pointing out that it’s a somewhat watery and really rather flavourless vegetable. Sounds great, doesn’t it?

But actually, cooked in the right way it can be very good, and it seems that the critical thing is to add lots of flavour – which marrow will apparently soak up in almost any quantity. Herbs and spices obviously work well here (ginger, chilli, paprika, coriander, thyme, basil), but so does lemon, as well as cheese (pecorino, parmesan, feta), and pork (belly, bacon, chorizo).

Inspired by the idea of such wonderful flavours – and having already decided that I wanted to make some form of stuffed marrow – I decided on the following recipe. And I’m happy to say that it really did deliver, with an intense and pleasing flavour as well as an interesting texture.

Now, I do still have a third of this giant vegetable in my freezer, and am tempted to try one of the wonderful sounding recipes that I’ve recently come across for preserves – marrow and ginger jam, spicy marrow chutney, or marrow dill pickle. What do you think? But it would be great to hear other favourite marrow recipes as well…

I used ⅓ of a large marrow

A handful of cherry tomatoes, cut in half

I used a mix of parsley, mint and coriander

A handful of coarsely grated pecorino

Take your marrow (or large courgette) and slice it lengthways. Scoop out the seeds and place on a roasting tray.

Put the couscous in a pan or bowl, add the juice of ½ lemon, and add enough boiling water to cover. Place a tightly fitting lid (or cling film) onto the pan / bowl and leave to stand for 5 minutes.

Heat the olive oil in a frying pan over a medium-high heat.

Add the red onion and red pepper and fry for 5 minutes, or until just softened.

Add the chorizo and continue to fry for a couple of minutes until the juices are released and it begins to change colour.

Add the tomatoes to the pan and leave for about 1 minute.

Stir the mixture into the couscous along with the herbs, and season to taste with salt (if meeded) and black pepper.

Spoon into the centre of the two marrow halves.

Place in the oven for 20-25 minutes, but keep an eye on it, and if the mixture starts to colour too much, cover with foil.

Remove from the oven when the marrow is tender but not mushy (you should feel some resistance when the tip of a knife is inserted into the side).

Sprinkle some grated pecorino over the top. You can eat it on its own, or alongside a simple salad.

Originally from the South of England, I've also had homes in Australia (Canberra) and the US (Los Angeles). I've been based in the UK city of Sheffield for a couple of years now. My blog is about adventures with food - markets, ingredients, books, recipes, places I've eaten and other related experiences. It focuses on stories from Sheffield, South Yorkshire and nearby Derbyshire, as well as places farther afield.
View all posts by Georgina →
This entry was posted in Food, Recipes, Seasonal, Vegetables and tagged chorizo, couscous, marrow, stuffed marrow. Bookmark the permalink.

15 Responses to Marrow Stuffed with Chorizo and Couscous