I’ve mentioned previously that I adore carrot cake, and just as I enjoy experimenting with new recipes, there are a few favourites that I take pleasure in making time and time again. This is one of those, and it makes delightful, individual cakes that are perfectly moist (but certainly not soggy), and delicately flavoured with vanilla, orange, and just a hint – the right amount – of cinnamon.

On occasion I’ve made them without adding the frosting, which means that I can re-define them as muffins (although strictly speaking this probably isn’t the case, but I’ve never had any complaints), and offer them up as a tasty breakfast treat. On the other hand, this orange cream cheese frosting really does complement them well (sweet, but also tangy and sharp), and it’s my favourite way to eat them – along with a good cup of coffee.

Because of the cream cheese frosting, they do have to be kept in the fridge. However, they do seem to last remarkably – surprisingly – well there in an air-tight container (probably because they’re so moist), and I have eaten them up to a week after baking them. Just try – if possible – to remove them from the fridge and leave them to come to room temperature before eating. 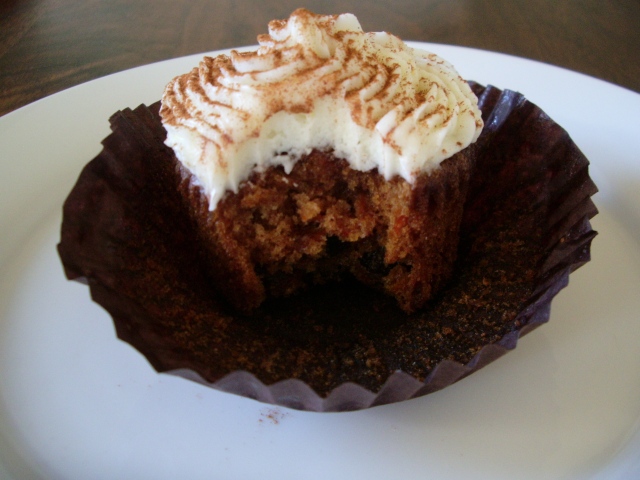 For the orange cream cheese icing:

This makes plenty to ice 15-20 cupcakes

Finely grate the carrots and drain off any liquid. Combine the grated carrots and raisins in a large bowl using a wooden spoon and put to one side.

In a large mixing bowl beat the eggs and sugar together for several minutes and then add the oil, vanilla extract and orange zest and beat well.

Sift the flour, bicarbonate of soda, salt and cinnamon into a separate bowl, then gradually add these ingredients to the egg and sugar mixture, beating well after each addition. Pour this mixture into the bowl containing the carrots and raisins and incorporate using a wooden spoon or spatula until they are evenly blended.

Carefully spoon the mixture into the cupcake cases, filling them to about two-thirds full. Bake in the oven for about 25 minutes – the cupcakes will be quite dark brown in colour and feel ‘spongy’ to the touch. Remove from the oven and leave the cupcakes in their tins for about 10 minutes before placing on a wire rack to cool.

To make the icing, place all the ingredients in a mixing bowl and beat well until thoroughly combined and the icing is smooth and pale. This will take several minutes in an electric mixer. Ice the cupcakes only when they have cooled completely, and finish with a sprinkling of ground cinnamon if you fancy it.

As these cupcakes have a cream cheese frosting, they will need to be kept in an airtight container in the fridge (where they should stay moist and fresh for a good few days).

Adapted from: Cupcakes from the Primrose Bakery, Martha Swift and Lisa Thomas

Originally from the South of England, I've also had homes in Australia (Canberra) and the US (Los Angeles). I've been based in the UK city of Sheffield for a couple of years now. My blog is about adventures with food - markets, ingredients, books, recipes, places I've eaten and other related experiences. It focuses on stories from Sheffield, South Yorkshire and nearby Derbyshire, as well as places farther afield.
View all posts by Georgina →
This entry was posted in Breakfast, Food, Recipes, Sweet things and tagged Cake, carrot cake, orange cream cheese icing. Bookmark the permalink.