Inspired by my recent visit to Wales – and needing something to nourish me in the midst of a British winter – it occurs to me that the perfect dish to cook for lunch is cawl. I’m told that in Welsh, cawl is a general term that means soup (broth), whereas in English it is used more specifically to refer to a traditional Welsh dish that can be categorised variously as either a soup or a stew depending on the particular cooking method used (the latter is thickened with flour). Contemporary recipes include meat (usually lamb, although historically both bacon and beef have been more popular choices), as well as a range of seasonable vegetables, including leeks, carrots, potatoes and swede (rutabaga)*.

I was told by the butcher who sold me the lovely Welsh lamb for this recipe that it’s the national dish of Wales, although this actually lead to a good-humoured argument with another customer who insisted that simply wasn’t the case (his vote definitely, jovially and very loudly, went to laverbread – a traditional dish made from seaweed). I’m also still not entirely

sure how to pronounce it, and having been given two different suggestions (the butcher insisted on ‘cowl’ while the customer maintained it was ‘kaul’), aim rather unconvincingly for something that is not quite either, so that it usually becomes ‘cowell’ (as in Simon, and which is almost certainly very, very wrong).

What I do know is that it’s a simple, hearty, homely, comforting one-pot meal that is bursting with flavour – and as with many soups and stews, it’s best made the day before you serve it. And, along with the traditional accompaniments of crusty bread and cheese, it certainly proved to be the perfect choice for a warming lunch after a brisk mid-winter walk.

*This is one of my favourite UK / USA differences in culinary vocabulary. According to Wikipedia, rutabaga (used in the USA and Canada) is from the old Swedish word rotabagge. It is referred to as swede in commonwealth countries including England and Wales, Australia and New Zealand. In Scotland it’s a turnip, which gets particularly confusing because to me a turnip is something completely different. Its common name in Sweden is kȧlrot.

Salt and pepper to season 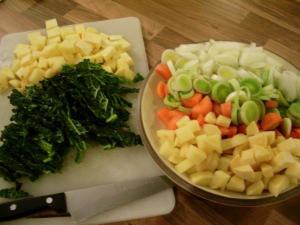 Note: to some extent the ingredients listed here are a guideline – especially when it comes to quantities – so feel free to alter them depending on what’s in season, what you’ve already got hanging around in your kitchen, or – even better – can dig-up from the garden.

Place the lamb into a large pan and pour over the stock. Bring to the boil, then reduce the heat and continue to simmer for one hour.

Add the chopped vegetables – apart from the cabbage – and continue to cook for a further hour, adding the cabbage about 10 minutes from the end of the cooking time. Add salt and pepper to season. Remove from 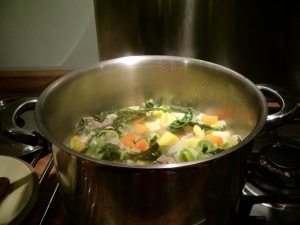 the heat, cover and set aside to cool.

When you are ready to serve, return the mixture to the boil and heat for approximately 15 minutes, until completely heated through.

Serve in large bowls, with crusty bread and Welsh cheese on the side.

Originally from the South of England, I've also had homes in Australia (Canberra) and the US (Los Angeles). I've been based in the UK city of Sheffield for a couple of years now. My blog is about adventures with food - markets, ingredients, books, recipes, places I've eaten and other related experiences. It focuses on stories from Sheffield, South Yorkshire and nearby Derbyshire, as well as places farther afield.
View all posts by Georgina →
This entry was posted in Food, Lunch, Meat, Recipes, Soup, Vegetables and tagged Cawl, National dish of Wales. Bookmark the permalink.

8 Responses to Cawl: The National Dish of Wales. Probably.