My quest to discover the Californian autumn was temporarily – albeit very agreeably – disrupted at the weekend as I travelled to visit friends in Bermuda Dunes, one of a number of communities in the Coachella Valley desert region. Located approximately 2 ½ hours south-east of Los Angeles, it is seriously sunny, hot and dry. This definitely isn’t a place marked by seasonal change. Known for having the warmest winters in the western United States, the area is characterized by a number of resort cities (including Palm Springs and Palm Desert), which accommodate the large number of nomadic residents who migrate from climates that are colder and wetter and who stay for just a few months each year. What is now essentially an extensive artificial oasis has produced a vibrant landscape, with dark green palm trees and vivid red bougainvillea contrasted dramatically against the brilliant blue background of the sky. In turn, this is bordered by a natural landscape that is spectacularly mountainous and incredibly impressive. 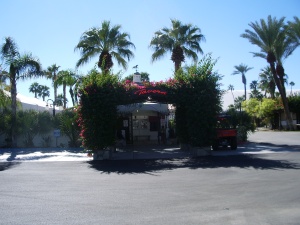 I’m lucky enough to have visited the area before, but none of us have been to our brunch venue previously – The Tack Room Tavern at the Empire Polo Club. Entering the Tavern, which is located adjacent to the polo fields (we have already watched a small group crossing the parking lot on horse-back), involves passing under an attractive floral archway and through ornate wrought-iron gates. Once inside, I’m struck by how stereotypically ‘American’ it all seems: the substantial wooden interior, the sturdy leather saddles, and the comfortable-looking booths.

Not used to this sort of décor, it reminds me of a scene from the movies, and contrasts sharply with the neat grass of the polo pitches, and the perfectly cultivated bushes in the nearby rose garden. It’s easy to feel like you’re part of the ‘in’ crowd here though. Not only does the game of polo suggest something stately and rather spectacular, but the Empire Polo Club is host to the world-famous Coachella music festival, held each year in April.

Renowned for the price of tickets (it’s expensive), as well as the number of celebrities counted amongst the festival goers (it’s near Los Angeles), it is considered a rather exclusive event. But the reception in the Tavern is warm and friendly. It’s surprisingly quiet – with only a handful of other customers – and we sit outside, enjoying the still pleasant temperatures and welcome shade provided by the marquee. Certainly on this particular morning it’s a very calming place to be. 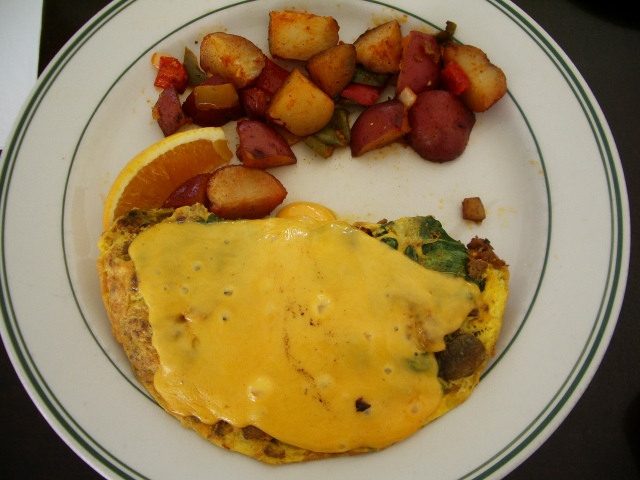 The menu is simple, with largely typical (Southern Californian) breakfast fare, and all priced reasonably at around $10 each. Tempted by the breakfast burritos and the eggs Benedict, we end up instead with 3 portions of huevos rancheros and two three-egg omelettes (and despite a good selection of fillings we both choose to have them stuffed with chorizo, mushrooms, spinach and cheese). The bottomless mimosa also proves to be a popular choice. And a triumph, as each top-up consists of increasing amounts of sparkling wine and just a splash of orange juice. Moreover, at $5.75 it’s a bargain. The service was attentive and relaxed. My omelette was perfectly cooked, and the fillings generous and tasty, with a delicious chorizo that was bold enough to flavour every single bite. It was perhaps a bit odd to see the cheese served as a single thick slice covering the entire omelette, and I’m pretty sure that I’ve never had cheddar that tasted quite like it, but in context it actually worked rather well. Huevos rancheros is a popular Mexican breakfast dish that consists of fried eggs served on a tortilla with tomato-chilli sauce. Accounts of this varied, and the final verdict suggested that it was good although perhaps not the best example of its kind. Both were served with breakfast potatoes that were absolutely delightful. Fried with peppers and onions they were coated in a perfect spicy rub. They were irresistible and despite being pretty full I ate every single one. We took time to sit, rest and let this digest before taking a leisurely stroll around the beautiful grounds at the club. It was a pretty good way to start the day!

Originally from the South of England, I've also had homes in Australia (Canberra) and the US (Los Angeles). I've been based in the UK city of Sheffield for a couple of years now. My blog is about adventures with food - markets, ingredients, books, recipes, places I've eaten and other related experiences. It focuses on stories from Sheffield, South Yorkshire and nearby Derbyshire, as well as places farther afield.
View all posts by Georgina →
This entry was posted in Brunch, California, Review, Travel. Bookmark the permalink.